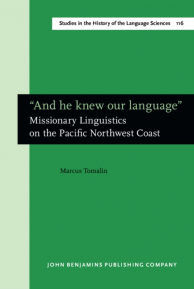 This ambitious and ground-breaking book examines the linguistic studies produced by missionaries based on the Pacific Northwest Coast of North America (and particularly Haida Gwaii) during the late nineteenth and early twentieth centuries. Making extensive use of unpublished archival materials, the author demonstrates that the missionaries were responsible for introducing many innovative and insig… htful grammatical analyses. Rather than merely adopting Graeco-Roman models, they drew extensively upon studies of non-European languages, and a careful exploration of their scripture translations reveal the origins of the Haida sociolect that emerged as a result of the missionary activity. The complex interactions between the missionaries and anthropologists are also discussed, and it is shown that the former sometimes anticipated linguistic analyses that are now incorrectly attributed to the latter. Since this book draws upon recent work in theoretical linguistics, religious history, translation studies, and anthropology, it emphasises the unavoidably interdisciplinary nature of Missionary Linguistics research.