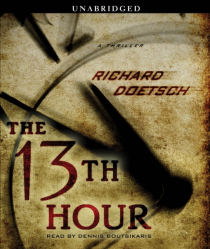 A mesmerizing thriller -- told in reverse! A surprising and utterly original story that blends page-turning suspense with exhilarating imagination as a man goes back in time to prevent a vicious crime from ruining his life.Nick Quinn is being held in jail, accused of the murder of his wife, Julia. He knows she's dead--he saw her bloody corpse--but he's innocent. A mysterious gentleman gives Nick … a talisman that takes him back in time, hour by hour, for a total of twelve hours. With each hour, Nick finds more clues to the identity of the killer, but he also discovers that his actions in the past may have unexpected repercussions in the future. If he doesn't set things right by the thirteenth hour, all will be lost, and his desperate attempts to save Julia's life may lead to a far greater catastrophe than he could have ever imagined.