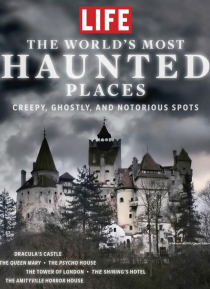 You might want to keep the lights on as you read The World’s Most Haunted Places. This spine-chilling Special Edition from LIFE is filled with striking photos and eerie stories about some of the world’s creepiest places. There’s the hotel that inspired The Shining . . . the Amityville Horror house . . . and the dilapidated farm that was home to the serial killer who inspired The Texas Chains… aw Massacre, The Silence of the Lambs, and Psycho. Not every spot is horrifying, though. Some, like Angkor Wat or the ancient ruins under Lake Titicaca—are mysterious, even spiritual. Others, filled with mummies, abandoned dolls, rusting prison bars, or headstones, are unnerving. But they all have one thing in common—they exist partly in our world, and partly in a shadowy realm of fear and horror. With dozens of unforgettable photographs The World’s Most Haunted Places takes readers on a round-the-world tour of places that you’ll never be able to forget.