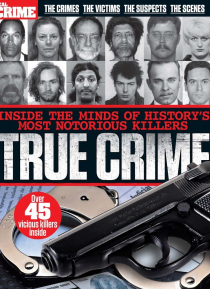 In True Crime, we investigate some of the most iconic crimes in recent history, from O. J. Simpson's 'Trial of the Century', to the monstrous actions of Edmund Kemper and Charles Manson. Featuring a host of genuine evidence, including official police documentation and unbelievable images, True Crime gives you an insight into the minds of some of history's most notorious killers. Featuring: The De… ath House - Take a look inside Sing Sing prison’s Death House and the electric chair dubbed ‘Old Sparky’. From the archives - Delve into the past and investigate some of history's most infamous criminals, from Ned Kelly to Charles Manson. Criminal profiles - Discover the truth behind the criminal cases that shocked the world. Iconic images - View incredible photos charting some of the most notorious crimes of the last century.