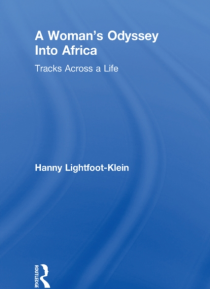 Here is the intriguing story of one woman's mid-life flight from her stultified, middle-class, psychologically crippling, and unfulfilled existence into a world of high adventure, danger, hardship, and endurance, which ultimately leads her to autonomy and recognition. In her new book, A Woman's Odyssey Into Africa, Hanny Lightfoot-Klein chronicles three year-long solo backpacking treks through rem… ote areas of sub-Saharan Africa. In the process, she discovers the mainsprings of strength within herself as she follows her own drummer, finding the courage to face the darkest and most secret convolutions of her own mind. She weaves the story of her journey through the men, women, and children she meets, and the dangers and adventures she faces as a lone woman traveler--part and parcel of the path she has chosen to take.She infuses readers at any stage of life, especially women, with the courage to do what their individual drummer dictates, as she did, to find fulfillment in life. Lightfoot-Klein assures readers in her book: Even a life of quiet desperation is not beyond redemption. Change starts with a reassessment of the distortions in self image one has been programmed to accept. It starts with an inner rebellion, a realization that something has been amiss and a desire to set it right, if only to leave a better heritage for one's children. And then, most important of all, it begins with a single, wild, breathless moment, where one picks up an unaccustomed load and steps off into the unknown . . . Her message is truly for everyone.

Other eBooks releases by