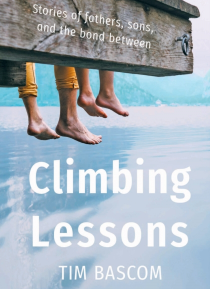 When Doc Bascom tries to show his grade school sons how to climb a huge sycamore, he ends up dropping 12 feet flat-out on his back. Stunned, he finally gasps, &quoteSo that's how it's done.&quote And in that moment, he becomes an emblem for all fathers-trying to lead the way, failing, then getting up and trying again.This &quoteclimbing lesson&quote is just one of 40 playful, sometimes poignan… t stories by award-winning author Tim Bascom, who illustrates the special bond between fathers and sons-and how that relationship must change with time. When Tim takes his own turn at fathering, he realizes that his devoted toddlers are turning into unimpressed teenagers. No longer the hero he had hoped to be, he must accept a new, flawed version of himself, not unlike his father before him.These brief inter-linked stories show that abiding affection can still prevail, bringing fathers and sons closer, even as they tackle the steepest parts of the climb.

Other eBooks releases by Tim Bascom