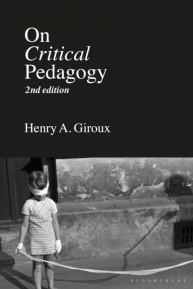 Alongside Paulo Freire, Henry A. Giroux is widely considered to be the founding father of critical pedagogy. This classic work represents his best writing on critical pedagogy spanning the past 40 years. The 2nd edition includes four new chapters covering the rise of fascist culture in America and across the globe and the dictatorship of ignorance in the age of Trump and post-truth.This impassione… d work opens by discussing critical pedagogy in schools before extending the notion to the educational force of culture, politics, and society. Giroux analyses the increasingly empirical orientation of teaching, focusing on the culture of positivism and examines some of the major economic, social, and political forces undermining the promise of democratic schooling in both public and higher education. He argues against the tendency by both right wing and neo-liberal interests to reduce schooling to training, and students merely to customers. He points to the increasing attack on pubic and higher education by right-wing populists and the Trump administration in an age of growing authoritarianism. Giroux also considers the legacy of Freire and issues a fundamental challenge to educators, public intellectuals, and others who believe in the promise of radical democracy.

Other eBooks releases by Giroux Henry A. Giroux