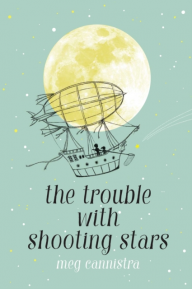 ';A story brimming with hope and sparkling with magic. Meg Cannistra's writing shines as bright as any shooting star.' Cassie Beasley, author of Circus Mirandus ';Loving, imaginative, and gorgeously written, this book shines with magic and heart.' Anne Ursu, author of The Lost Girl Wonder meets Mary Poppins in this heartfelt debut novel about magic, healing, and the importance of family.Twelve-yea… r-old Luna loves the nighttime more than anything else. It's when no one gives her ';that look' about the half mask she has to wear while healing from a disfiguring car accident. It's also the perfect time to sit outside and draw what she sees. Like the boy and girl from the new family next doorzipping out of the window in a zeppelin and up to the stars. At first she thinks she's dreaming. But one night they catch her watching. Now Luna spends her nights on adventures with them, as they clean full moons, arrange constellations, and catch jars of stardust. She even gets to make a wish on a shooting star they catch. But Luna learns that no wish is strong enough to erase the pastas much as she may hope to.

Other eBooks releases by Meg Cannistra