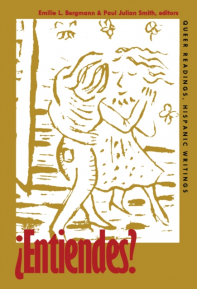 &quote Entiendes?&quote is literally translated as &quoteDo you understand? Do you get it?&quote But those who do &quoteget it&quote will also hear within this question a subtler meaning: &quoteAre you queer? Are you one of us?&quote The issues of gay and lesbian identity represented by this question are explored for the first time in the context of Spanish and Hispanic literature in this … groundbreaking anthology.Combining intimate knowledge of Spanish-speaking cultures with contemporary queer theory, these essays address texts that share both a common language and a concern with lesbian, gay, and bisexual identities. Using a variety of approaches, the contributors tease the homoerotic messages out of a wide range of works, from chronicles of colonization in the Caribbean to recent Puerto Rican writing, from the work of Cervantes to that of the most outrageous contemporary Latina performance artists. This volume offers a methodology for examining work by authors and artists whose sexuality is not so much open as &quotean open secret,&quote respecting, for example, the biographical privacy of writers like Gabriela Mistral while responding to the voices that speak in their writing. Contributing to an archeology of queer discourses, Entiendes? also includes important studies of terminology and encoded homosexuality in Argentine literature and Caribbean journalism of the late nineteenth century.Whether considering homosexual panic in the stories of Borges, performances by Latino AIDS activists in Los Angeles, queer lives in turn-of-the-century Havana and Buenos Aires, or the mapping of homosexual geographies of 1930s New York in Lorca's &quoteOde to Walt Whitman,&quote Entiendes? is certain to stir interest at the crossroads of sexual and national identities while proving to be an invaluable resource.

Other ebooks releases by