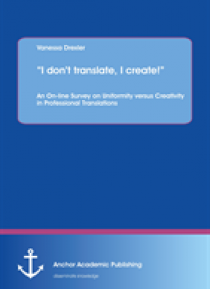 &quoteI don't translate, I create!&quote - This is the slogan of a translation agency called &quoteSternkopf Communications&quote located in Floha, Germany. The translators at this translation agency are specialized in the field of marketing and perceive creativeness their daily bread. But what does this actually mean - I don't translate, I create? Undoubtedly, the translation of a text from o… ne language into another is not an easy and straightforward process. On the contrary, the translator needs to invest much time and one or the other headache before a target text (TT) finally sounds natural, fluent, coherent and logical for the target audience. Different possible translation solutions will have to be considered, language as well as culture-related equivalents often are not easily at hand etc. Would it not be pleasant if machine translation (MT) was there to help with this process?Nevertheless, as promising as this may sound, no machine or software developed so far is able to independently produce TTs meeting the standards of marketable translations, despite copious efforts to do so. This just goes to show how important the human capacity of creativity in language and text production is for the translation process. Without human creative thinking, TTs would, in fact, truly only read like translations, i.e. mechanical reproductions of the source text (ST) in a different code, rather than natural texts in their own right. Good translations, however, distinguish themselves by not revealing their readership that they are &quotemerely&quote renderings of the original text. Hence, a slogan such as &quoteI don't translate, I create&quote, emphasizes the effort that is put into the translation process quite well, making the customers of Sternkopf Communications instantly aware of the fact that their texts are in good hands and will eventually not read like mechanical translations but as if they were well-composed originals. Yet, despite the enormous importance of creativity in translating, computer-aided translation (CAT) tools are being used frequently by professional translators, not to replace but to support the translator in their daily business. From the 1990s onwards, using CAT tools has been becoming increasingly popular for the following reason: They are said to help translators to achieve faster turnaround times by storing completed translations in a translation memory In so doing, CAT tools enable their users to translate in a more consistent way, since they search source texts for words, phrases or sentences that have already been translated before and stored in the TM so that the translator does not need to translate this text unit again 'from scratch'. Accordingly, this paper pursues two related purposes. The first is to compare the different CAT tools in their degree of usability to gain an impression of which of these translation memory solutions is perceived to meet translators' technological requirements best. The second purpose is to identify translators' perspectives on uniformity and creativity in translations with the goal to shedding light on the question whether CAT tools generally tend to positively or negatively influence the translation process on a rather linguistic than technological basis.

Other ebooks releases by Vanessa Drexler