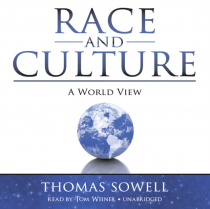 Thomas Sowell is one of America's leading voices on matters of race and ethnicity. In his book Inside American Education he surveyed the ills of American education from the primary grades to graduate school with ';an impressive range of knowledge and acuity of observation,' according to the Wall Street Journal. Now in his book Race and Culture he asks the question: ';What is it that allows certain… groups to get ahead?' The answer will undoubtedly create debates for years to come.The thesis of Race and Culture is that productive skills are the key to understanding the economic advancement of particular racial or ethnic groups, as well as countries and civilizationsand that the spread of those skills, whether through migration or conquest, explains much of the advancement of the human race. Whether this body of skills, aptitudes, and disciplines is called ';culture' or ';human capital,' it explains far more than politics, prejudice, or genetics. Rather than draw on the experience of one country or one era of history, Race and Culture encompasses dozens of racial and ethnic groups, living in scores of countries around the world, over a period of centuries. Due to its breadth and scope, this study is able to test alternative theories empirically on a vast canvas in space and time. Its conclusions refute much, if not most, of what is currently believed about race and about cultures.