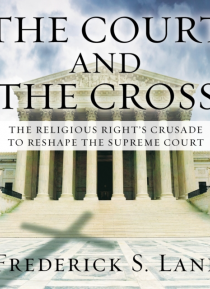 While President George W. Bush has appointed two Supreme Court justices during his terms in office, the next president may be in a position to appoint up to three new justices, replacing one third of the Court. This relatively high number could drastically alter future Supreme Court rulings. Now is the perfect time to consider the role of politics in Supreme Court nominations and in the new appoin… tees' ensuing decisions.In The Court and the Cross, legal journalist Frederick Lane reveals how one political movement, the Religious Right, has dedicated much of the last thirty years to molding the federal judiciary, always with an eye toward getting their choices onto the Supreme Court. This political work has involved grassroots campaigns, aggressive lobbying, and a well-tended career path for conservative law students and attorneys, and it has been incredibly effective in influencing major Court decisions on a range of important social issues. Recent decisions by the Right's favored judges have chipped away at laws banning prayer in school, bolstered restrictions on women's access to abortion and birth control, and given legal approval to President Bush's use of federal funds for religious organizations. In the near future, the courts will confront a host of hot-button issues, from stem cell research and gay rights to religious expression on government property and euthanasia. As the courts hear cases driven by an evangelical agenda and tainted with religious rhetoric, Lane surveys the damage to the wall separating church and state and asks, Has the Religious Right done irreparable harm?As a new president takes office, it is more important than ever to understand the political and social forces behind the Supreme Court nomination process. The Court and the Cross is a revealing look at how much has already been lost, thanks to the concerted efforts of the Religious Right to change the Court, and a timely warning of how much more we could yet lose.