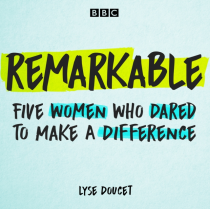 Five remarkable women. Five stories from across the world, where these influential people made an impact on democracy in their nations.Broadcast in January 2018 to mark the 100th anniversary of the first time British women won the vote, this fascinating series sees BBC Chief International Correspondent Lyse Doucet travel across the globe, meeting women from Northern Ireland, Saudi Arabia, Iceland,… Afghanistan and Liberia. She hears reflections from some of the world's most influential women's rights activists, including former presidents, and shares her own experiences of reporting from some of the most troubled regions. In Belfast Lyse speaks to Monica McWilliams, who was one of only two local women who were at the table during negotiations which led to the Good Friday Agreement of 1998. She then travels to Saudi Arabia to meet Madeha Al Ajroush, who battled for 30 years to get women the right to drive. In 1980, Iceland did something no other nation had done: they elected a female head of state. Lyse Doucet travels to Reykjavik to meet Vigdis Finnbogadottir. Now 87, she was president for exactly sixteen years and remains the longest-serving elected female head of state of any country to date. Lyse then meets the formidable Shukria Barakzai, Afghanistan's ambassador to Norway. Shukria was one of only a handful of female MPs to speak up for women's rights in Afghanistan, and faced death threats for her views. Finally, Lyse Doucet travels to Liberia to talk to President Ellen Johnson Sirleaf, the first elected female head of state in Africa.These inspiring in-depth interviews reveal the behind the scenes stories of key moments in our global history, and show that the victory of 1918 for women in Britain has continued to resonate through the last century.Originally broadcast on BBC Radio 4 in January 2018 as Her Story Made History.Producer: Ben Carter Researcher: Louise Byrne