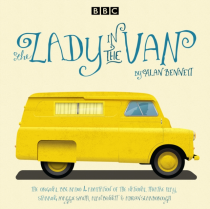 Maggie Smith stars in this BBC radio adaptation of Alan Bennett's highly acclaimed autobiographical stage playAn eccentric old lady moves into a quiet street in Camden Town. There she remains, installed in her van in glorious self-sufficiency, until the council instructs her to move on. Then a kind homeowner invites her to move her van into his garden - where she stays for the next fifteen years. … This is the fascinating story of the genteel vagrant who found a unique place in Alan Bennett's life and writing. But the drama is as much about the author himself as Miss Shepherd. Why did Alan Bennett let her commandeer his driveway? Was he acting out of kindness, weakness, or hidden guilt over not spending enough time with his own mother? Did he always subconsciously plan to exploit Miss Shepherd for literary profit? Thought-provoking and moving, The Lady in the Van tackles profound questions about social responsibility, homelessness and mental illness with a lightness of touch characteristic of Bennett the master storyteller. With a full cast including Adrian Scarborough, Marcia Warren and Alan Bennett, this bitter-sweet comic tale stars Maggie Smith as Miss Shepherd. Now a major BBC feature film, starring Maggie Smith and Alex Jennings.